What do you do when you graduate from a small, upstate New York college with a degree in Fine Arts? You move to the big city with a good friend to become a struggling and starving artist! I didn't do too well with the struggling and starving part, and got a decent job and after a while met and fell in love with a wonderful man. We got married on September 29th, 1984 and the last time I ever saw him was on December 21st that same year. 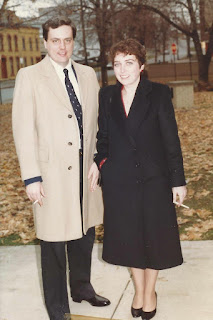 I think the photo above was taken the year before we got married. The night Frank went missing, I had to work late, and he was going to meet up with a couple of friends for a holiday drink in a bar near Wall Street in NYC. I was going to take a bus over the bridge from Manhattan to our apartment in Staten Island, and he was going to take the ferry home. We had plans to go Christmas shopping the next day with his brother and sister-in-law. He never came home.

Frank's body was found in the water off Manhattan on March 23rd, 1985. He had been dead the whole time he was missing. We'll never know what happened, but the theory was that he was robbed and pushed into the water during a struggle. We were still newlyweds with our whole life in front of us. For 3 months, each day was filled with fear and panic. Where could he possibly be? Was he in pain? Did he have amnesia? I remember someone saying to me at the time, that if he was dead, wouldn't I want to know it so I could get on with my life? My answer was no; I didn't want to give up hope.

Years later, when I had moved back to upstate New York with my daughter, I heard about an organization called "The Center for HOPE." Doug and Mary Lyall's daughter, Suzanne, went missing from a college campus in Albany in 1998 and has never been found. They created this non-profit to help other families of missing young adults and adults. Doug died a couple of years ago, but Mary carries on with her mission. They have worked on and helped to pass legislation at both the state and federal levels to protect missing persons. They helped establish New York State's Missing Persons' Day, which is held on the weekend closest to Suzanne's birthday each year, and which is commemorated by a day of education and ceremony. The list of thigs they have done to help others is impressive, and their story is heartbreaking. You can read more about them here.

When Frank was missing, I was fortunate that he had an uncle who was a police lieutenant. He pulled strings to have Frank declared an official Missing Person, and I was able to have the help of both the Staten Island Police and the Manhattan Missing Persons detectives. At the time, and to some extent today, an adult must have a medical reason or have disappeared under highly suspicious circumstances to be declared a missing person right away. Adults are allowed to walk away from their lives. It is not a crime and unless there is good reason, law enforcement isn't always able to do a lot. Back then, no one had really heard of the internet, or even of cell phones. There wasn't a network of good people and organizations to help with advice and information. When I learned about The Center for HOPE, I became a volunteer and now serve on the Board of Directors of the non-profit.

So that is how I came to be at the New York State Missing Persons' Day ceremony last weekend. The photos below are from the ceremony. The woman in red is Mary Lyall. The gentleman is one of our State Senators, Jim Tedisco, who has been a strong supporter of the organization and legislation for missing persons, and who is the MC of the ceremony every year. 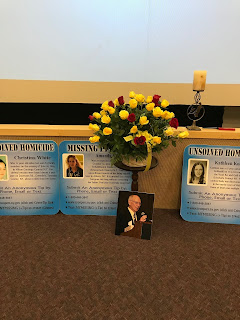 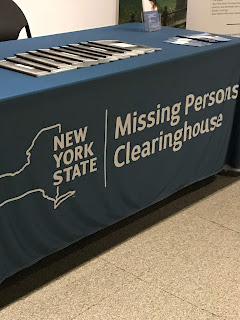 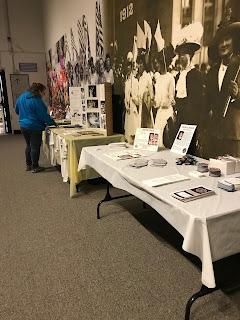 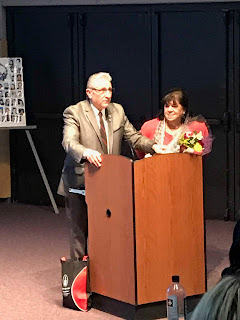 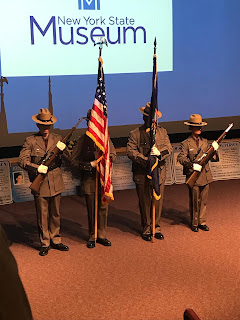 I went through the horror of having a loved one missing for three months. I cannot imagine how people manage for three years, ten years, a lifetime. Below is a photo of the NYS Missing Persons' Remorial (the word is a combination of remembrance and memorial) in Albany, NY.  It is a 20 foot granite and stainless steel frame which holds an eternal flame at the top, to light the way home for the missing. My prayer is that they will all find their way home. 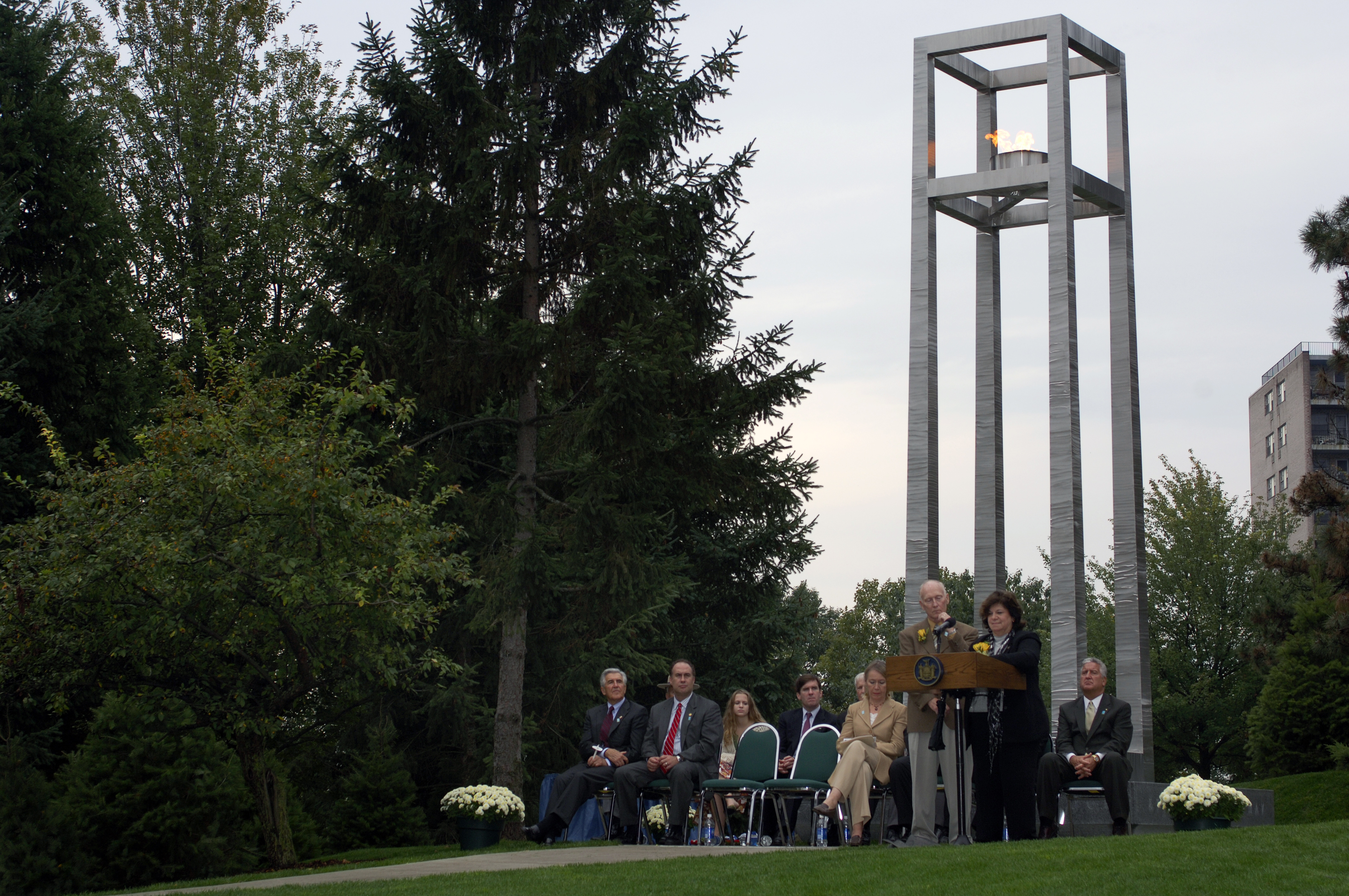 Just a quick post. I've had such a busy week! The most wonderful reason was the arrival of Angelo Joseph, my best friend Donna's newest grandson. I hope he'll call me Grandma Sue like his big brother does. 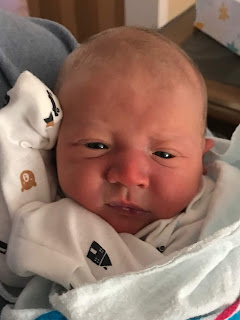 Today, our spring took a bit of a setback. We had a couple of hours of snow, and it managed to accumulate about an inch or two. Tomorrow it is supposed to warm up again, so it will probably all melt (fingers crossed). There's a cardinal in the tree in the photo below. 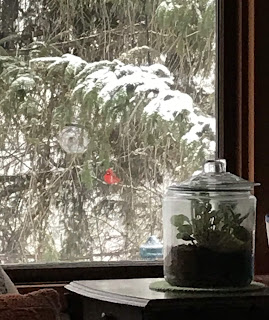 I made a bunch of needle-felted bunnies and my friend Maureen delivered them to the store we sell from in Saratoga Springs. 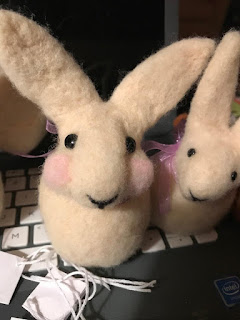 These little cuties are on the shelf near my kitchen sink so they keep me company when I'm washing the dishes. 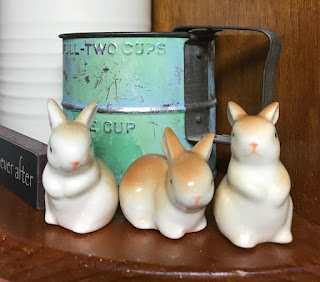 This little bunny is the real thing and belongs to Donna and her grandson, Alex. He named her "Sweetheart" and there was no convincing him to choose another name. 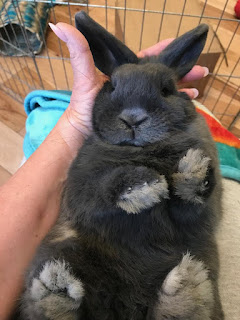 She's the happiest, most spoiled bunny I've ever seen. Loves to be held and snuggled. She is litterbox trained and gets along well with Donna's tiny Yorkshire terrier.

Tomorrow I will be spending the day "working" at the New York State Missing Person's Day event held in Albany, NY. I'll write about that soon.

Hope spring is in full swing in your part of the world!

Sue
I'm a retired art teacher living with my significant other and lots of 4-legged friends in upstate New York. Proud mother of an incredible daughter who has travelled near and far and currently lives in San Francisco.